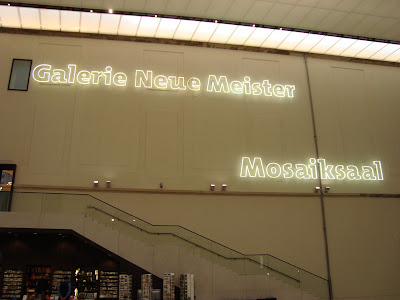 The last time I was in Paris in summer I missed the Gerhardt Richter show, so when I found out that his works were on show in Dresden till the end of September I jumped at the chance so see them . Most Czech people go to Dresden  shopping for end of  season sales  and other foreigners go there to  see the old masters in the Zwinger  as well as the vast collection of old porcelain.
A new addition is the Albertinum , which after the disastrous floods of 2002 has been  renovated and now houses the Galerie Neue Meister.The New Masters  encompass  mainly German art in a wider European context from the last 200 years.


Almost every major genre is represented with at least a few pieces. Starting with the monumental portrait of “Napoleon in Coronation Robes” from c.1804 by Francois Gerard and then going on through to the romanticism of the 19th century where a lot of space is given to Caspar Friedrich. Caspar Friedrich was an important German painter of his time who specialized in romantic misty landscapes which often told a story. Little known outside the Germanic world today, his career is a metaphor for the modern history of Germany itself. The mystical landscapes he painted, some of which are on display, such as Cemetery Entrance are reminiscent of the original Gothic literary genre.


Further on another whole room is devoted to Max Slevogt, a German impressionist whose canvases in the Albertinum testify to the European fascination with the exoticism of foreign lands, in this case Egypt, paradoxically today a frequent resort holiday destination for many of his countrymen.


From there the exhibit moves further, into the 20th century and on to the consequences of WWI on German society. One is confronted with numerous portraits of the bourgeoisie middle classes trying to hold of some level of decency in the impoverished and politically fragile Weimar Republic. Otto Dix’s portrait of the Glaser family is a good illustration .This period in German art is not often shown internationally. While thinking of last year’s centenary of the beginning of WWI, one is confronted with the fact that Germans also had to pay  a heavy price for the war they lost. Josef Scharl, “Blinder Soldat” (Blind Soldier), 1928 or another of Dix’s paintings „Woman with Child“1921 show some of the despair Germany faced.

One painting that is slightly more light hearted is Werner Hoffmann’s “Under the bridge”-1932 which strongly evokes the cult film “Cabaret“. This gloom comes out again following WWII which gradually morphs into more socially  themed expressions as can be seen in the works of Richter’s peer Georg Berlitz’s   “The working man in Dresden” 1969.


At the chronological end are Gerhardt Richter’s contemporary abstract works which seem to chime with the new progressive image unified Germany has made such an effort to project. Richter, a former East German who immigrated to West Germany in the 60’s was a student at the art academy in Dresden, making this shows a sort of homecoming.


Richter’s work shares some of the hallmarks of his generation with his inclination to pop art, the use of mass advertising images, synthetic elements and waste materials such as wood. His works are also created with use of actual work tools like brooms, sponges or palette knives, all influences from the likes of Warhol, Lichtenstein and Jackson Pollock. Some inspiration though might be taken from early Neo Dada years. While some of his works reminded me of Monet’s lily pond reflections I did realize that he has used  and uses a variety of techniques including digital photography .Having been born in 1938 his life is also the story of the modern day  Germany so often seen in his work.


The Galerie Neue Meister also has works by Picasso, Henry Moore, Kandinsky, Max Bill or Degas thereby making it interesting even to those who have very little knowledge of German art. Twee Meissen porcelain, baroque Madonnas and ancestral canvases are all very nice but it also helps to get back to reality.