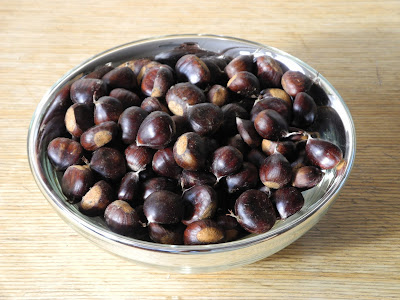 I first had roast chestnuts a few winters ago on the street in Vienna. I thought their taste nice, a bit like small potatoes. Before that I had always had them both sweet and savory but always part of a meal where their taste was in competition with other flavors.
Although rare in the Czech Republic today, they have been grown and consumed for centuries especially by the poor who valued the rich harvest of chestnut trees and the high nutrient content of their nuts They were often referred to as the “bread of the poor” and according to a friend were grown in bigger numbers in the area of Pardubice. They were a part of the Czech diet till the communist culinary revolution of the 50 and 60s which brought in substitutes such hoards of pork, sausages and other processed meat based delicacies. Despite this they are often sold at highly inflated prices like many other simple produce. Chestnuts are mostly eaten in winter in this part of the world although nothing stops them being consumed year round.


This year we were fortunate to have discovered a large amount of edible chestnuts Castanea sativa Mill (yes, not all chestnuts are edible) in the local park/ forest. Non-edible or horse chestnuts are the more prevalent kind and can be identified first by the outer peal or husk which in the case of edible chestnuts has a thick needlefish outer skin. In the non edible variety these texture is much smoother. A second way of identifying edible chestnuts is that they have a sharp pointed “tail” while non edible ones are often completely round. The chestnuts we see in the forest are generally non edible as even certain animals find them toxic although they are collected by forest wardens to feed deer in winter.


When not bought in a can or already pealed chestnuts can be quite laborious to shell and clean, especially for those who have never done it before. One might need a bit of practice and dexterity when first trying out this task.


My advice to first time consumers of edible (sweet) chestnuts is to try the basic classic-roast chestnuts. This method not only gives one practice in cleaning the nuts but also allows one to taste them without any other influence. I store mine in a well ventilated place either in a paper bag or a linen pouch.
A good idea is to start with a smaller amount of chestnuts which have to be pulled out of their prickly outer skin and then lightly cleaned. It is then good to make an incision into the hard brown shell. Next simply heat the oven to about 210 °C and roast for about 10-15 minutes. Once out of the oven they have be taken out of their brown shell before they get cold. One must also remove the brown membrane which is rather bitter and can be mildly poisonous. One is then left with a potato like knob of chestnut flesh. This simple method of preparation is ideal as a winter alternative to pistachio nuts, quail eggs or other simple pre dinner nibbles. There are of course many other ways to enjoy these nuts such as cooking them in sugar which is a great treat for Christmas. This year I will also try putting them in stuffing along with almonds.

In my experience edible chestnuts work very well in Asian cuisine having tried them in Chinese cooking, they make for both a hearty and exotic meal.

Chestnuts are the ideal for an amateur urban forager like many of us.
Vystavil Unknown v 11:38