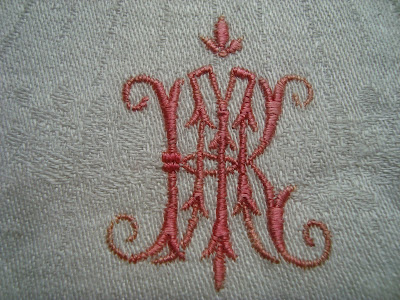 Well over a decade ago while rummaging through the bazars and antique shops  of Prague I discovered  one in the unlikely location of the lesser city which much to my surprise sold only antique linens. Much in the tradition of true Prague antique institutions it is small and filled with wares, in this case mostly delectable starched white damasks tied over with ribbons. I would later come to barter these linens for holidays in France. I have always been partial to a certain dining decorum but Ahasver as this linen closet is called opened a whole new world to me. Not only because of what is on sale but also because of the detail, knowledge  and attention the  proprietress Dita Hudcová  exuded with the linens. I have since learned to look at table linens in a completely different way.

Linen has had a long tradition in the Czech lands going back centuries, like in most other parts of Europe it was the basic fabric of peasants until the 20th century. Grown locally and processed at home it was the main textile in every home. The poor were clothed in it while the rich ate with it after it had been bleached white from its original brown state. Contrary to popular assumption though, pure linen has always been more expensive than cotton. Industrial linen production formed an important part of the economy in the Czech lands in the 19th century and was known for its high quality. It was mayor export item to countries such as the US where along with Irish linen it was much sought after. Czechoslovak linen and other textiles retained this high position till the 1960’s when synthetic materials came into use. From the 70’s the  tradition of  superior local linen was carried on by Krásná Jizba  a company set up to promote Czechoslovak  crafts after WWI, paradoxically it ceased to exist after the Velvet revolution.
Tablecloths evolved from medieval altar cloths and were initially used to cover bare wooden tables. It was not until the 18th century that “modern” style tablecloths began to appear along with napkins. Having individual napkins prevented diners from using the tablecloth itself as one big napkin. Thus the first napkins were also very big, indicating what they had evolved from. The popular use of tablecloths was also linked to the appearance of dedicated dining rooms and the widespread prevalence of cutlery. It was not until the 19th century that table linens became a standard part of every bride’s trousseau as the urban middle classes expanded and copied the mores of nobility. It was not unusual for men to come home for lunch during the workday and the table in a middle class home was always expected to look elaborate if not grand.

Trousseaus consisted of all types of household linens from napkins and table cloths to bed linens, sleeping gowns, lace and towels. Families generally has numerous  sets of table linens  which were used up till the regular “big wash” .Bigger tablecloths were often used for more festive family occasions  which necessitated a bigger table for more people. As a general rule the quantity and quality of   linens was always dictated by the means of the bride’s family.
In the 19th century damask table linens could be bought at almost all markets in Prague   such as Havelský trh which is still used today   where they were sold along with fruits, vegetable and other grocery items. The growth of shops and department stores gave people a wider selection and possibilities of buying linens depending on their taste and budget. There was a wide range of damask patterns which changed with the aesthetic fashion of the period and were presented in sample catalogues. Most patterns were floral.Over the years I have most come to appreciate Art Nouveau patterns as they have a certain sinuous quality which is always pleasing to the eye. The interwar period saw a much simpler style of patterns and monograms which are equally as appealing in a more “Bauhaus style”.

Customers could either buy already finished tablecloths and matching napkins or they could buy only the yardage which came in big bolts. The yardage always had empty bands between the patterns so that customers could then cut out the individual napkins or towels and hem them at home. Most table linens were white as they could go with any color of china and could easily be washed and bleached of stains. Colorful linens did appear but only became more prevalent in the interwar period and in the 1950’s with whimsical geometric patterns that make a table pop.

Once purchased the next step was to sew on a monogram. The monogram was almost always the initials of the young woman before she got married. If additional linens we bought after marriage due to damage or wear the new initials were put on. Often the monograms were sewn on by the girl herself as linen dowries were bought for girls as young as 3 or 4 years with further purchases later. It was oftentimes the grandmother who would teach her granddaughter the art of embroidery and sewing while the mother was taking care of the household. These monograms were quintessentially seen as a way of showing the skill and marriage worthiness of a young woman. Sometimes monograms were stitched by a professional needlewoman who was paid to stitch a certain style of monogram chosen from a catalogue.
The monograms had the practical purpose of identifying the owner of the linen and in some cases preventing maids from stealing them. Occasionally the linens also had a number sewn on to keep track of each piece. Last but not lease the monograms in their elaborate versions help soothe the owner’s ego. I personally have learned to appreciate the elegance of a monogram irrespective of if it has anything to do with my family names or not. Occasionally depending on the taste of the owner the monograms were stitched with colorful threads. Whereas in France red monograms were a fashion in Bohemia at the end of the 19th century they were seen a patriotic statement because   under the Austro-Hungarian Empire the Bohemian flag was red and white.


The end of WWII along with the communist takeover brought radical changes to the old dining habits which would seal the faith of elaborate table linens. Dining rooms disappeared from communist flats, women had to work leaving them little time to stitch monograms or prepare fancy table settings. This though was compensated by the socialist love of heavy meat based meals which came to represent the epitome of satisfaction. Today some natives have come back to damask tablecloths, napkins and napkin rings sometimes for aesthetic or for nostalgic reasons. I would encourage anyone interested in antique household linens to visit Ahasver as it is one of the sights of the lesser city.They are even on facebook now.
I have used mostly color linens a taking photos of white linens is very tricky.