No too long ago the Prague City Gallery opened a new exhibition space in a building that had been left empty for years. The new gallery is located on the last floor of the Colloredo-Mansfeld Palace a few steps from the Charles bridge in Karlova ulice. The exhibitions are mostly of contemporary Czech art but the real star of the show is the palace itself.


Originally built as a residence in the middle ages, the building went through a renaissance makeover but the present day appearance commissioned by Paul Henry Count Mansfeldu-Fondi  asked František Ignác Preé to  rebuild it in the Baroque style in 1737. The 19th century saw a further neo-rococo transformation when the palace was given  a dowry to Princess Vilemína Colloredo–Mansfeld .Her husband Count Vincent Karl von Auersperg owned the Slatiňany chateau and both of these residences have similar interiors. The palace was kept in the family until WWII after which it was confiscated and used by the Czechoslovak Academy of Sciences as offices. 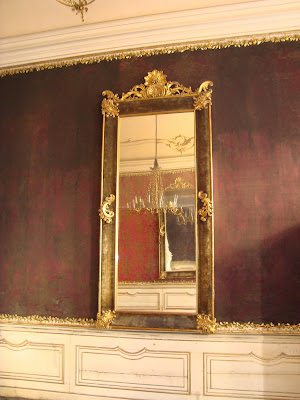 When I first went to the palace I was amazed at how the interiors had been left "dans son jus" most probably last touched under communism. In part this may be to the city’s lack of funds. Although parts of the building have been repaired for safety measures the most interesting part -the first floor piano nobile and ballroom have been left in their original state. It is a wonderful relic of a bygone era fit for the WOL. It is also said that Mozart played there while he was in Prague.

After ascending a not particularly grand staircase the visitor is brought to the first floor which is made up of  2 enfilades of rooms each with a grand culmination.

The first route towards the rear of the building starts with a small antechamber with a stone clad fireplace, followed by a second longer room .Both have original molding and rococo details on the doors ,ceilings ,shutters and are complemented by slightly worn-out but still elegant crimson floral fabric wall coverings which give both rooms a grand feeling. The triumph is the oval ballroom where the visitor is immediately drawn to the very high ceiling with perfectly preserved frescoes by Bartolomeo Scotti depicting the victory of the Habsburgs over the Turks . The only thing obstructing the view is the monumental chandelier in the center which is a wonder in itself.


Two fireplaces on either side and with an adequately grand mirror above each leave one in no doubt that this is the most important room in the palace. The feeling of opulence is further underscored by the big windows which look unto the inner courtyard thereby giving the ballroom no other view to compete with. Behind the ballroom is a smaller room which lets the eye rest with is comparatively simple but still elegant ceiling. 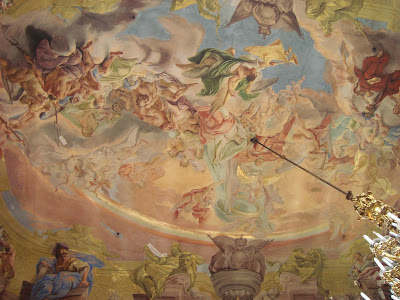 On other side of the piano nobile facing the street and the river is a smaller more intimate enfilade of reception rooms. Again there is rich rococo style plasterwork and details all over the rooms including an ornate white tile stove, the standard form of heating at the time. The rooms facing the street also have red damask fabric wall coverings with a pattern very reminiscent the recently on trend “Hollywood regency” pattern and are embellished with stylized gilded plaster ropes to keep them in place. 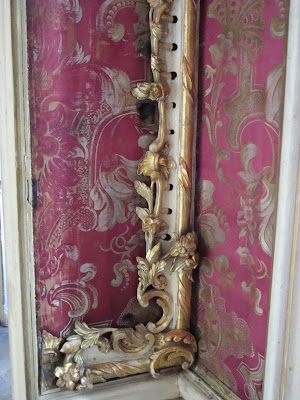 The only disappointment is that there no elaborate parquet floors, which might be a result of later changes. The great reward here is the view of the city and the neighboring churches. The view is even better from the floor above which today shows works by young Czech artists, one wonders why the paino nobile was not here. 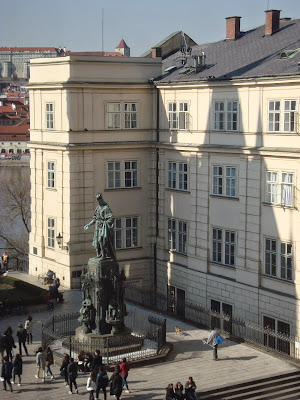 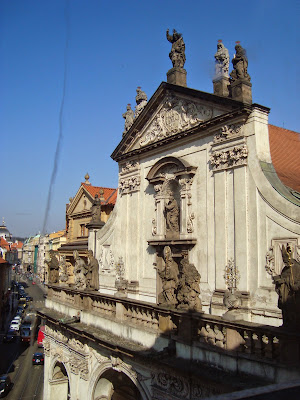 Although not all of the interiors are original to at least the 19th century the Colloredo-Mansfeld Palace is an unusual opportunity to see a historical palace which has not been restored to sweet perfection or inaccurately redone due to a lack of funds. Given its location it’s also a great place to find a bit of calm in the middle of the city.