During the recent heatwave I went out to see a friend near Kokořín and after walking around the nearby forests we decided to cool down in the local pool. Given the temperatures, with everyone out it was a dip rather a swim. 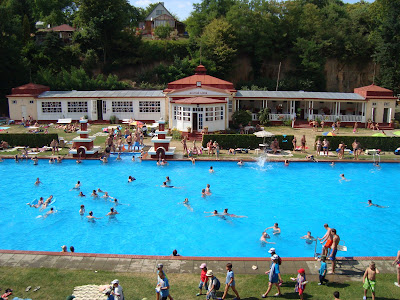 The swimming pool in Msěno is a unique structure surrounded by a lush lawn with a backdrop of sandstone rocks. It is one of the few recognizably art deco swimming pools in the country with many authentic details. The pool was inspired by a much more sophisticated example of a swimming pool and leisure grounds in Klánovice, which we would today recognise as a kind of country club. Unfortunately it no longer stands and can only be viewed in period photos.
In Msěno the unknown architect decided to go for the contemporary Rondo-Cubist art-deco style while mimicking 19th century spa colonnades where the hot springs .The main building is divided into 3 parts, each with a different purpose.

The central rotunda was conceived as the bar and dining room which could also hold an orchestra for live music. The right wing is enclosed in case of bad weather and was used meant as a restaurant, reading room and lounge. To the left is the open veranda containing individual sitting booths each with its own table and chairs. This section also has more of the “service” part of the building as it houses the cloakrooms , changing rooms and bathrooms most of which can still be seen  today in near original condition. All the windows and other architectural details are formed in the typical rounded cubist style down to the light fixtures. The veranda roofs are held up by pairs of pillars reminiscent of those in spa town colonnades.
The focal point of course is the swimming pool which is relatively generous by the standards of the day and has a luminous turquoise colour .Flanking the main  steps into the pool are two quintessentially art deco water fountains which provide a certain amount of whimsy . Pyramidal in shape with a ball finials, they follow through on the rondo cubist theme while also providing symmetry. 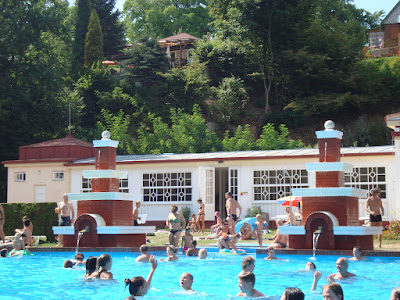 Built in the early 30’s was part of the interwar drive to provide citizens with a sports and leisure venue as well as hygiene facilities. Many houses did have indoor plumbing but not bathrooms as Jan Kilián a historian whose has written extensively about the swimming pool states. That is why they are aptly also called the Msěno Public Baths and still have one of the original bathrooms complete with fixtures and tub. Patrons (mostly women) could soak in these tubs for a fee for the period of 40 minutes. 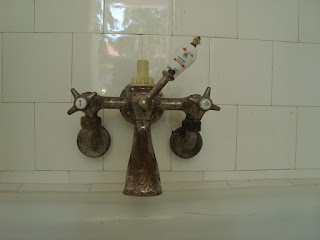 Another impetus for the building of such leisure venues was the changing lifestyle of the younger population where sports and the outdoors played a greater role as workers became entitled to paid leave. Havinga tan became a status symbol rather than a scar of manual labour.

Although not as well-known as the Barrandov Terraces swimming pool and restaurant which is an icon of interwar Czechoslovak glamour , this pool still has its claim to fame as it features in the debut film (Indian Summer)of the young Klára Issová. As Andrea Turjanicová mentions in her final thesis (Open-air Swimming Pools in Czech Architecture of the 1920s–1940s) most such places were built either in the above mentioned “spa “style or took a radically modern direction in the form of functionalist structures as the Barrandov pool, which today is derelict and further marred by the highway and bridge right in front of it. The diving platform became the emblem not only of Barrandov   pool but more generally of the sleek figures of those who used it.
These outdoor swimming pools were almost always fed by nearby natural sources of water making them pretty cold but were also designed as a social gathering place for the entire community. Unlike contemporary “aqua parks” which are mainly aimed at children these were focused at an adult clientele which is also reflected in the design and layout of the pool. The trend of building outdoor swimming pools went on into the 80’s when they were gradually overtaken by indoor year round pools and the eventual proliferation of private garden swimming pools.