I got to Letná Park every so often and although it is not always to drink beer I generally have a good time. 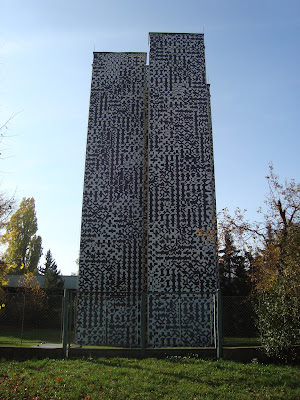 It was only now that I noticed   the work of one of my favourite Czech artists on display there. Standing on the stairs of the Agricultural museum I spotted a trio of columns with a vivid black and white geometric pattern. They are in fact ventilation chimneys for the Letná  tunnel right underneath. Erected in the 1969 they are one of Zdeněk Sýkora’s public works making use of architecture.
This work by Zdeněk Sýkora would be much easier to see if it was not obscured by the hideous carpark in front of it. The chimneys, covered in black and white tiles are the culmination of a decade when he focused on geometric patterns. His first structural images appeared in 1960 and were further perfected in 1964 with the use of computers following a set grid. The use of computers made him an innovator in what we today know as digital graphic design. A similar mosaic from the period can also be seen in Jindřišská Street which is now part of a cafe. This smaller mosaic though is much more expressive.

By 1970 the sharp edges  were gone and were instead replaced organic line to which appear  in his work for the next 40 years until his death. Sýkora made a number of works for public spaces some of which have unfortunately been lost. His last public architectural installation was at the in the entrance of the Air Navigation Services  building near Prague in 2005.By that time though he had moved on to his “lines” which were seemingly free flowing curves on a white background.
This was an interesting evolution of an artist who had spent the 40’s painting in the cubist and surrealist styles only to turn to rather traditional looking landscapes in the 50’s.His works from the 60’s onwards are in international collections  and fetch some of  highest sums for  Czech art.

Apart from Sýkora’s ventilation chimneys the park and its surroundings have a fair of modernist or contemporary architecture. The most notable being the Brussels 58 Expo Pavilion which gave its name to Czechoslovak mid-century modern. There is also the brightly clad maternity school right by the park and the buildings of the National Technical museum and the national Agricultural museum or the rather drab Ministry of the Interior.
It is a pity that the communist habit of putting large scale works of art in every public space has been done away with. Not all of it was great but when I saw the new subway stations I thought that at least a bit of aesthetic care could have been taken. These chimney stacks will always serve the tunnels technical needs as well as please passers-by.