Květa Pacovská is an icon of contemporary Czech art.
Although known mainly as an illustrator of children’s book she is an artist in her own right.
The municipal gallery of Prague in the Municipal library is showing her works of an artist, one if the main exhibitions this year. The exhibition’s name Květa Pacovská: Maximum Contrast sums up the truth that few know her as an abstract artist. 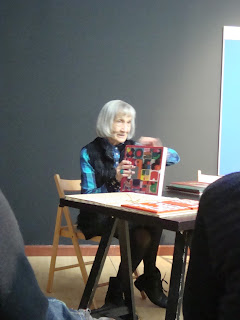 She has never quite been able to abandon her connection to books which she uses as an alternative to a canvas. Before the internet her illustrated books had the advantage that her art reached many people who could not or would not otherwise visit  a gallery. 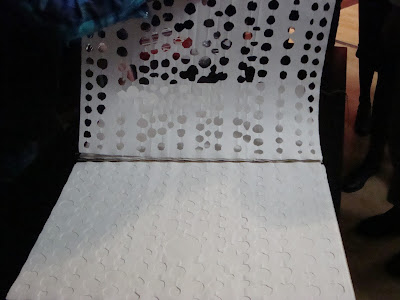 Her children’s illustrations have been widely used in books in France, Japan and Germany maybe thanks to her rather naïve way of painting for children. Till the 90’s most of her illustrations were for magazines or for stories of other authors. Her first solo books only appeared much later in life are really picture books where painting takes centre stage and the story line of words is just a supplement.
The works presented are almost all abstract and bear very little resemblance to what children would recognize. Her abstract, sparse and often vibrant compositions make a bold display. She has stayed true to her generation of artists who sought to deconstruct rather than construct the world on canvas. 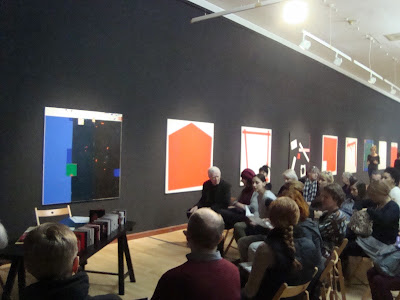 During a talk she gave in January  she presented a paper book from the  80’s as an art object, by carefully and systematically tearing out bits of paper from each page she was able to  achieve changeable patterns which in themselves work as works of abstract art. In a curious way she has been able to cross the line between literature and art.
I was myself surprised to discover her as an artist and even more surprised to at how good she is at it. 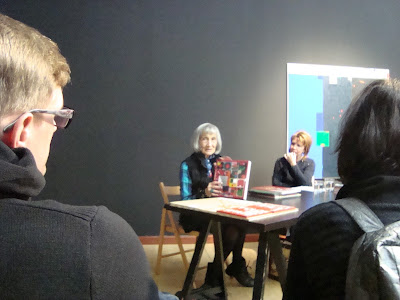