Under the directorship of Petr Nedoma the Rudolfinum has become the only state funded gallery to bring contemporary international art to the Czech Republic. The Rudolfinum is the only gallery of its size in the country to be able to host contemporary art on such a level over many years. The list of  foreign artists is quite long and impressive, everyone  from Raqib Shaw to Damien Hirst to the likes of Ana Mendieta, have all made their way to this grand gallery. The provocative works on display are often in stark contrast to the very graceful interiors of the exhibition space, making both stand out in equal measure.
While the National Gallery focuses on Czech art and old Masters, international art is mostly left to small independent galleries which struggle to thrive on such a small scene. The Rudolfinum also has the added advantage of being able to host both big and smaller shows. 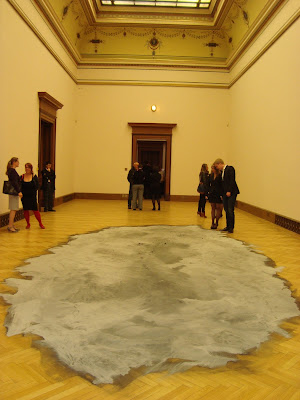 At the  end of May  Mr.Nedoma opened the show of Roger Hiorns which was curated  by David Korecký.This is yet another show with focuses on contemporary British art, perhaps as nod to where the epicenter of the art world has shifted to.
Roger Hiorns is one of the younger generation of British artists to gain wider recognition in the last few years. Though too young to be considered one of the YBAs who emerged in the early 90’s, he was nominated for the Turner Prize in 2009.This show was the most conceptual I have seen in the Rudolfinum to date and might summarize Hiorns’s oeuvre. Most of his works are not immediately understandable  to most as a major theme in his works are objects that tell a different story from what is evident at first sight-“an impression is an illusion“. His compositions of rigid industrial materials alongside the human body are meant to provoke thoughts through a certain amount of discomfort.
After a short opening speech and a glass of bubbles in the atrium those invited were confronted with installations based used recycled industrial materials and mechanical parts such an old plane engine which was always juxtaposed with something much more fragile. In this particular case fragility came in the form of three nude models that sat on and occasionally moved around the pieces. The great views of the Prague castle also created an apt contrast to disused car parts which were on display .The play between metal and flesh does prove to be very effective especially on the backdrop of the classically elegant rooms of the gallery.
I am not sure what many of the guests thought, especially the older male generation but I am sure that Mr. Hiorns, Korecký and Nedoma have succeeded in shaking things up a bit again.
Vystavil Unknown v 4:37