The entire art world has the Venice Biennale and Prague has the Prague Quadrennial. Arguably, the most important event on the Czech art calendar .With more than 60 countries showing and 111 installations it is critical for both local artists and foreign artists showing in the Czech Republic. This time the main themes are music, politics and weather. These were very much reflected in the opening ceremony which took place on the Old Town Square. Unlike similar events there was very little in the way of black-tie pompousness as all those invited gathered in the blazing sun by the Jan Hus statue. 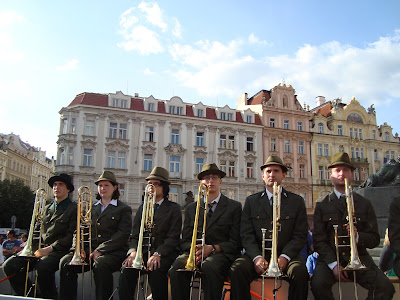 After some waiting they were greeted by a few open trucks loaded with brass band musicians, traditional folk singers and the Czech minister of culture Mr. Daniel Herman and Pavla Petrová the event’s director.  Both gave opening speeches. It was a sight slightly reminiscent of a mass communist rally of the 50’s.The political joke was not lost on anyone.
The crowd gradually dispersed into the different venues where the event is being held. As expected the Kafka house was too packed to get in since it is right of the square so we made our way to Clam-Gallas palace. There after another opening speech and lots of confusion the exposition was finally opened to visitors. The same situation was down the street at the DAMU studios.
The grand baroque Clam-Gallas palace is host to art from Greece, Iceland, Cyprus Switzerland, Quebec, Canada, Venezuela, , Ireland, Georgia, Norway and the UK. I particularly liked the installation on the stairs and then the Canadian pavilion which has been placed into the former ballroom and comprises of a series of outhouses each with its own little world. Many of the installations are multimedia works which is somewhat fitting to the events origins. A pleasant surprise was the sumptuous yellow reading/room library on the top floor with period features where visitors can go through art book related to the quadrennial.

The Prague Quadrennial  of Performance Design and Space goes back to 1967 and is the  result of internationally well received Czechoslovak art in the late 50’s and  60’s.At the time multimedia art was in its infancy and Czechoslovakia with its creation of such things as the Laterna Magica was at the forefront of this new movement.
This 13th quadrennial can be experienced all over the city apart from 14 primary locations. It is therefore advisable to look at the website in advance and plan an itinerary or follow one of the recommended routes. Tickets are not necessary for all exhibits such as the Swiss installation on Wenceslas square or the piazzetta or the national theatre. There are also numerous performance and public interaction events that can be seen in different parts of the city.

At the end of the evening all the artistic commotion made much more sense with a glass of wine in the open air courtyard café of the Clam-Gallas palace. 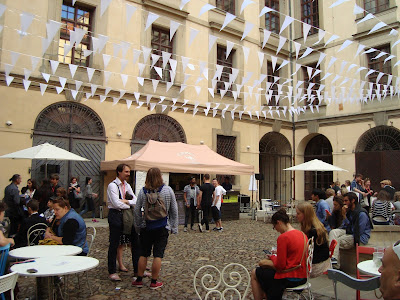