The last Museum Night did not bring any new discoveries on the part of new museums or art. All I wanted to do  was see a bit of what I already know and  I wanted to get away from the overenthusiastic crowds which once a year decide they have to catch up on all the art they have missed. I headed for the castle with the hope that few would make it there and went to the Sternberg Palace .Most people know this palace, tucked away in a small alley behind the Archbishop's Palace for its collection of old master paintings which are a part of the National Gallery. My real getaway was the garden or to be precise the sculpture garden which is not known to many.

The garden of the Stenberg Palace is accessed through a little door at the end of a dimly lit corridor right opposite the bathrooms, not exactly a grand entrance to a comprehensive selection of 20th century Czech sculpture. Furthermore the garden is disproportionately small to the size of the palace.It offers an intimate place to relax while being surrounded by sculptures. The pieces read as a textbook of influences on Czech art in the last century. 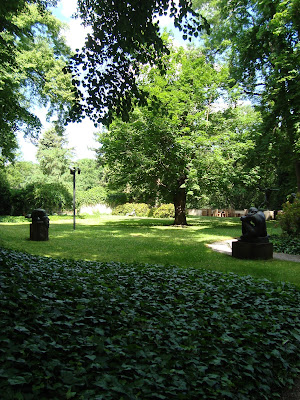 The palace was originally finished in 1697 for Vaclav Vojtech Count of Sternberg, the family eventually sold it and in 1871 the building became an art gallery. Not much is known about the history of the garden.

Once through the small door visitors are confronted with Jakub Obrovský‘s epic Slaying Odysseus most probably from the early 1930’s as he was awarded a bronze medal for the sculpture at the 1932 Los Angeles Olympic games.  Obrovský is an important persona in Czech art for he was the Don  of the Academy of  Fine Arts  in Prague in the 1930’s.Much of his work is  based on  ancient Greek and Italian renaissance sculpture with an emphasis on the human body  in movement .These influences  might come from his student years when he won  a scholarship to  Italy  and Greece .

While in Italy he met fellow Czech artist Jan Štursa whose female act Woman with a Dolphin finished in 1913 stands a few metres away. Both statues share a few common traits: nudity, the human body in motion, their monumental size and inspiration taken from Italy. This almost carnal statue was created at a time when the artist primarily depicted the mature female nude. It coincided with Antoine Bourdelle's exhibition in Prague which also impacted Štursa’ s work.

Jan Štursa can be regarded as one of the founders of modern Czech sculpture.Although trained under an older generation whose main focus was the national revival he chose to go a completely different way at the beginning of the 20th century. Woman with a dolphin shows hints of cubism which after Picasso’s 1907 Les Demoiselles d'Avignon set new artistic ground.
Czech art was only partially influenced by cubism with architecture being the main medium for the expression of cubist principles in the newly created country. The only recognizable cubist sculpture in the garden is from a much later period, it is the Sitter by Zdeněk Palcr from 1959. Palcr was quite prolific although he could never decide on finishing a piece and in the 1950’s he drew inspiration from the work of Otto Gutfreund, the main cubist sculpture in interwar Czechoslovakia.

The central part of the garden is given pride of place to Jan Lauda’s 1957 Stork placed in its own pool. Lauda was one Jan Štursa’s pupils whose work features many animal motives. 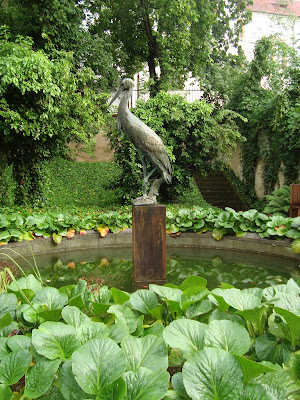 These are just a few of the statues in the garden which is also an ideal place for a nice picnic on the lawn or on the numerous seating areas around. Entrance into the garden is also free, therefore a great place to go with friends or kids while visiting the castle. 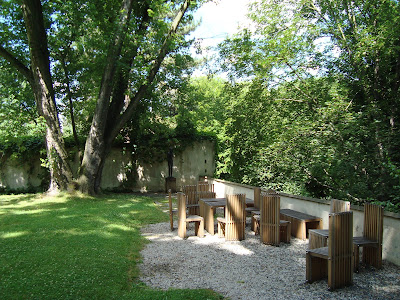