The frescoes in Libeňský zámek


At the end of almost every academic year I go to Libeňský zámek  for the concert of a local music school. The music and my friends are a big draw but the third reason I like to go are the beautiful frescoes in the ceremonial hall where the concert takes place.

In last few decades the area of Palmovka  had a reputation being  a seedy associated with  „un-adjustable  citizens’’ and other societal outcasts as it was  a frequented public transportation hub. Few people today realize that right above the subway station is a synagogue which was built by the Jewish community in the  18th century after  Jews were expelled from central Prague as they  also were seen at the time as “antisocial“. The synagogue and the history of the Jewish community in Libeň would merit a post of its own. Much though has changed in the last few years in this part of the city which is now being revitalized.

Within walking distance of the station is Libeňský zámek whose history goes back to 1363.It was rebuilt and modified numerous times and served as the summer residence of Prague mayors. Between 1769 -70 the building underwent a major facelift even hosted Empress Maria-Theresa and other members of the imperial court when the Terezin fortress was being built.
The frescoes date to this period and are a perfect expression of rococo aesthetics and social changes at the time. Although the author of the frescoes is unknown they have a have an ancient Greek theme as was fashionable during the period. The entire room is painted with a series of Greek gods, putti, architectural elements and two main “galant scenes“. The architectural elements act almost as an optical illusion. 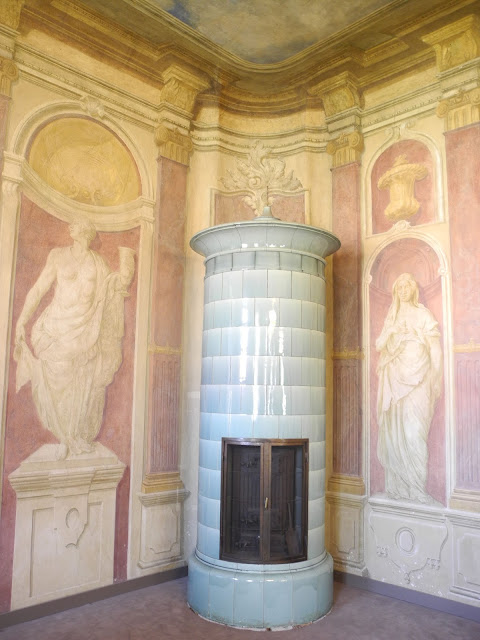 When entering through the antechamber, today the main entrance, the visitor is greeted with light decorative fresco flourishes around the windows and on the wall. Once inside the ceremonial hall there is Aphrodite, the goddess of love with a cherub on her side making a clear connection to the two main scenes on the adjacent walls.  On the other side of the door is Artemis with her arrows indicating hunting, a pastime which those who stayed at the chateau would have indulged in. There is also for example Zeus with his club a symbol of strength and fighting, a reminder that military peace signed here in 1608. 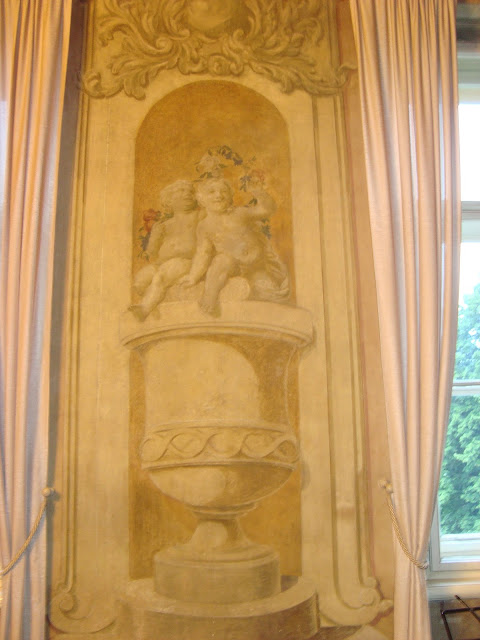 The two walls facing the windows have a galant scene on either side of the door, albeit a bit different each shows a young couple in courtship set within an idealized landscape of classical ruins with a river in the background .They is also a third figure in each frescoes who seems to be turning away from the couple as though they are a discreet chaperone. 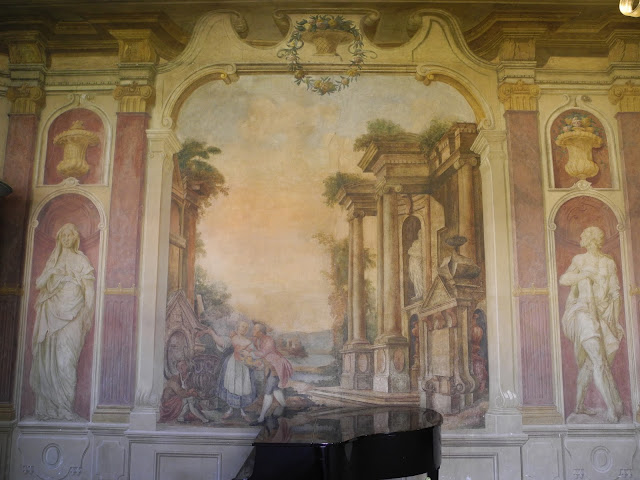 This genre of paintings made popular in the Rococo period is a variation on Watteau’s famous - Pilgrimage to Cythera. Such a form of arcadia was thought of as the ideal setting for amorous adventures .More broadly the depictions of couples or groups of people in an idealized landscaped showed a move away from the rigid formality of the French court after the death of Louis XIV, the "Sun King" in 1715.In the decades after Luis’s military fervour, the upper classes began to seek out painting with intimate sometimes even risqué topics with nature as a backdrop. Even Marie Antoinette, daughter of Empress Maria Theresa who often stayed here, kept a rural ideal at Hameau de la Reine at Versailles at this period. 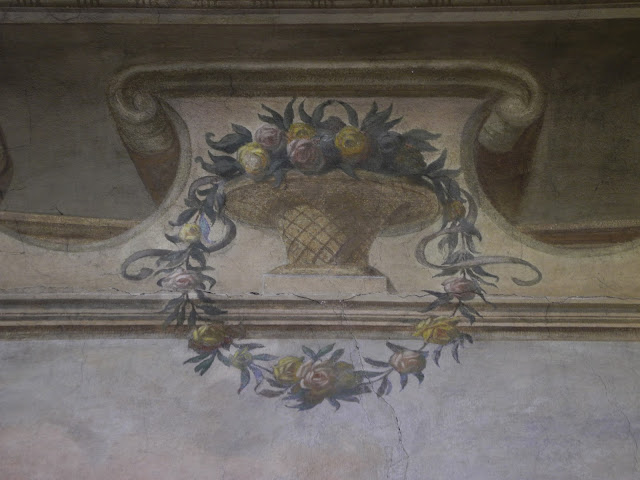 The ceiling frescoes of the ceremonial hall are equally as stunning despite being of a much later date. They were added before WWI by Jakub Obrovský a painter who repaired the wall frescoes at the time. In a very clever way he has continued with the use of the female form and the putti to bring the entire room together .His work which bears some art nouveau traces is almost indistinguishable at first glance.


The two tile stoves also give the room a further sense of symmetry which is taken trough to the windows and the clipped hedges outside.
Libeňský zámek  also has a lavishly painted baroque chapel by Richard Jiří Práchner a local artist celebrity of the time and further afield it also has an original mill which was once the service part of the chateau.

Many thanks to the City Council of Prague 8.