This year I have mostly gone to the ballet or opera, From the House of the Dead by Leoš Janáček for example turned out to be a pretty good performance. 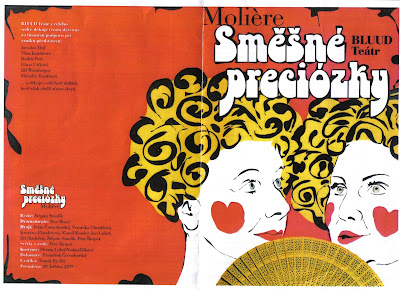 Last week though was a bit different when I was taken to see “The Affected Young Ladies” by Moliere also sometimes referred to as the “The Pretentious Young Ladies”. Albeit being of Moliere’s less well known plays it was definitely very amusing. Moliere is to French theatre what Shakespeare is to English play writing. Both men relied heavily on satire and wit and were each rewarded with royal patronage for their work. 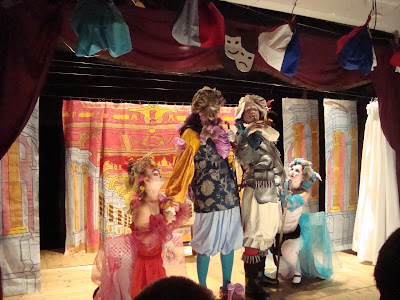 Translated into Czech by Moe Binar as Směšné preciózky, the play is about Magdelon(Polixene)  and Cathos (Aminte), cousins who come to Paris as young girls from the backroads. In Paris, the “epicenter” of the civilized world they are conned into being courted by two aristocrats- Marquis de Mascarille and Viscount Jodelet.In reality these two pranksters are mere servants of titled gentlemen but succeed in ridiculing the two young ladies. Needless to say the damsels have taken up all the airs and pretentions of polite society which just hastens their societal downfall. 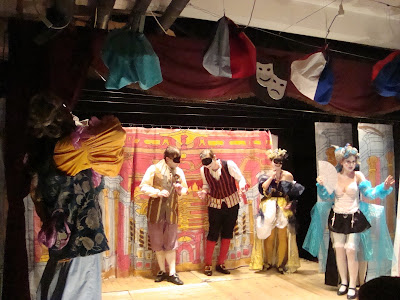 Even though the play was originally performed for the royal court in 1659 it is still completely relevant today. When two cousins criticize the wannabe suitors  for the lack of ribbons and other ornaments on their clothes ,  I immediately thought of the Prague Louis Vuitton set which looks for Lacoste crocodiles and Gucci labels on potential partners while discussing discount shopping trips to the US over sushi  in Pařížská ulice.The elegant verses and  noblesse of character which Magdelon and Cathos  seek in the pranksters can seem like the random use of anglicisms and  smart phone applications so common with a certain breed of  Czech men.
The play is being performed by Divadlo Orfeus a mostly amateur theatre group situated in a former underground air raid shelter on Smíchov. In a curious way this location is perfectly suited for a Moliere play as he depended heavily bold  costumes and just a few basic props because   his troupe moved from town to town, never knowing  where and how they would perform next. The ensemble of Divadlo Orfeus was able to convey many of these makeshift origins with their stylized props, spare direct lighting and very innovative costumes (the stays in the ladies dresses were made of anti-slip pvc sink mats). 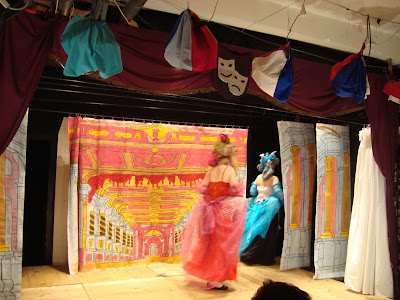 Last but not least Jiří Sládeček as Marquis de Mascarille was terrific along with his other colleagues. They really brought in all the drama and affectations worthy of the French court. The 1, 5 years of rehearsals and preparations have paid of well .In part maybe to the theatre’s director “principal” Radim Vašinka whose experience on the Prague theatre scene goes back to the Rubín in the 1960’s
My “slumming “was well worth it.